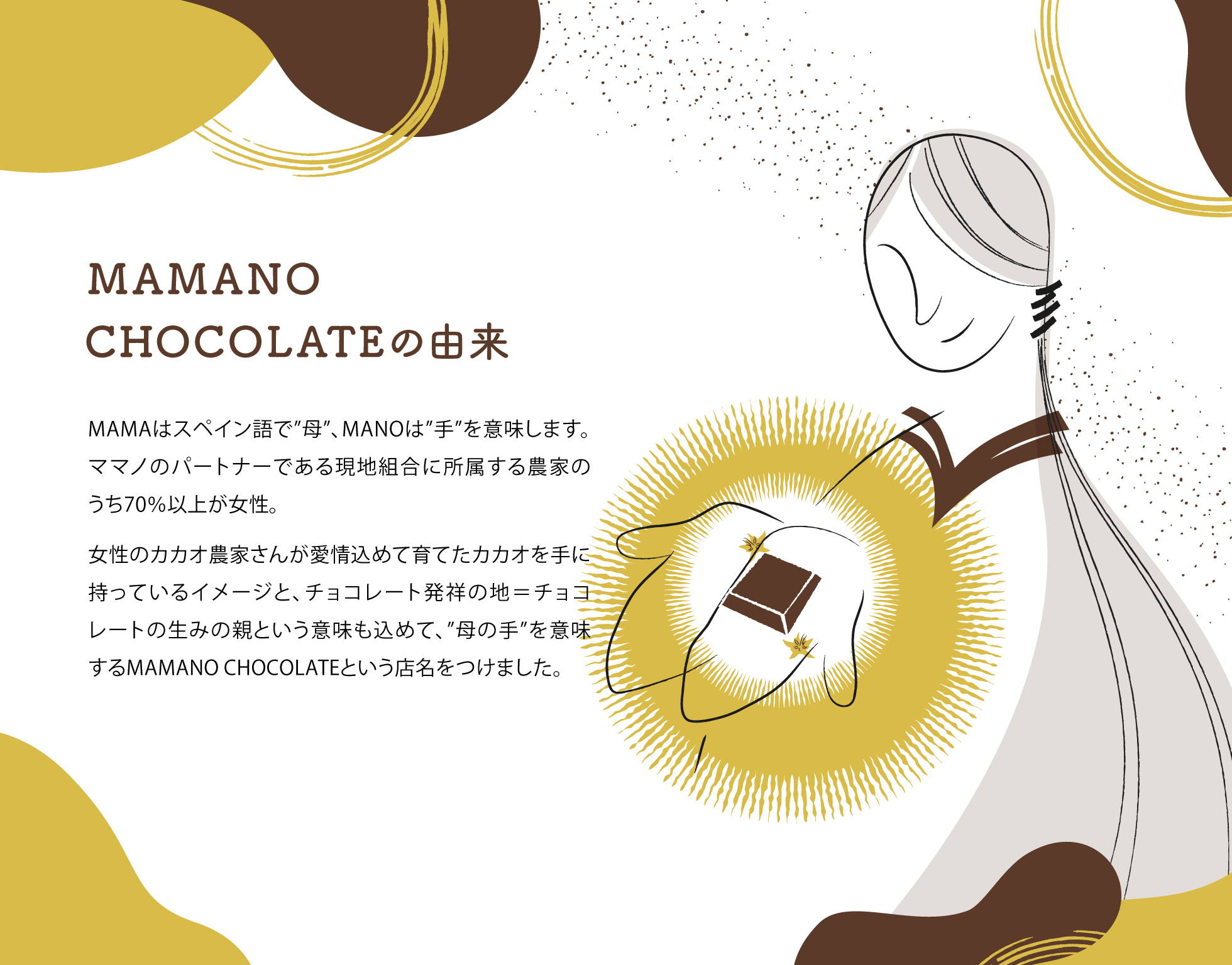 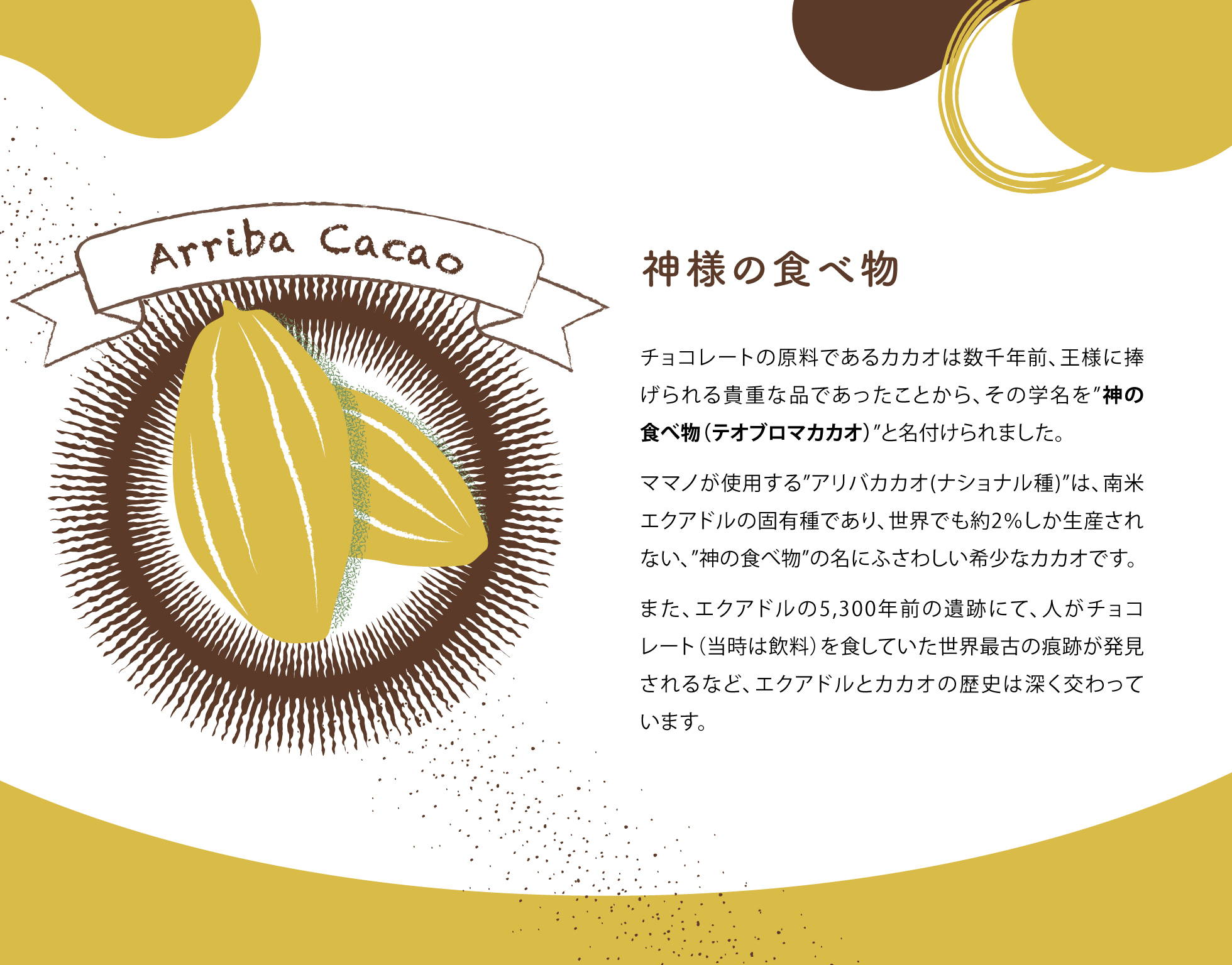 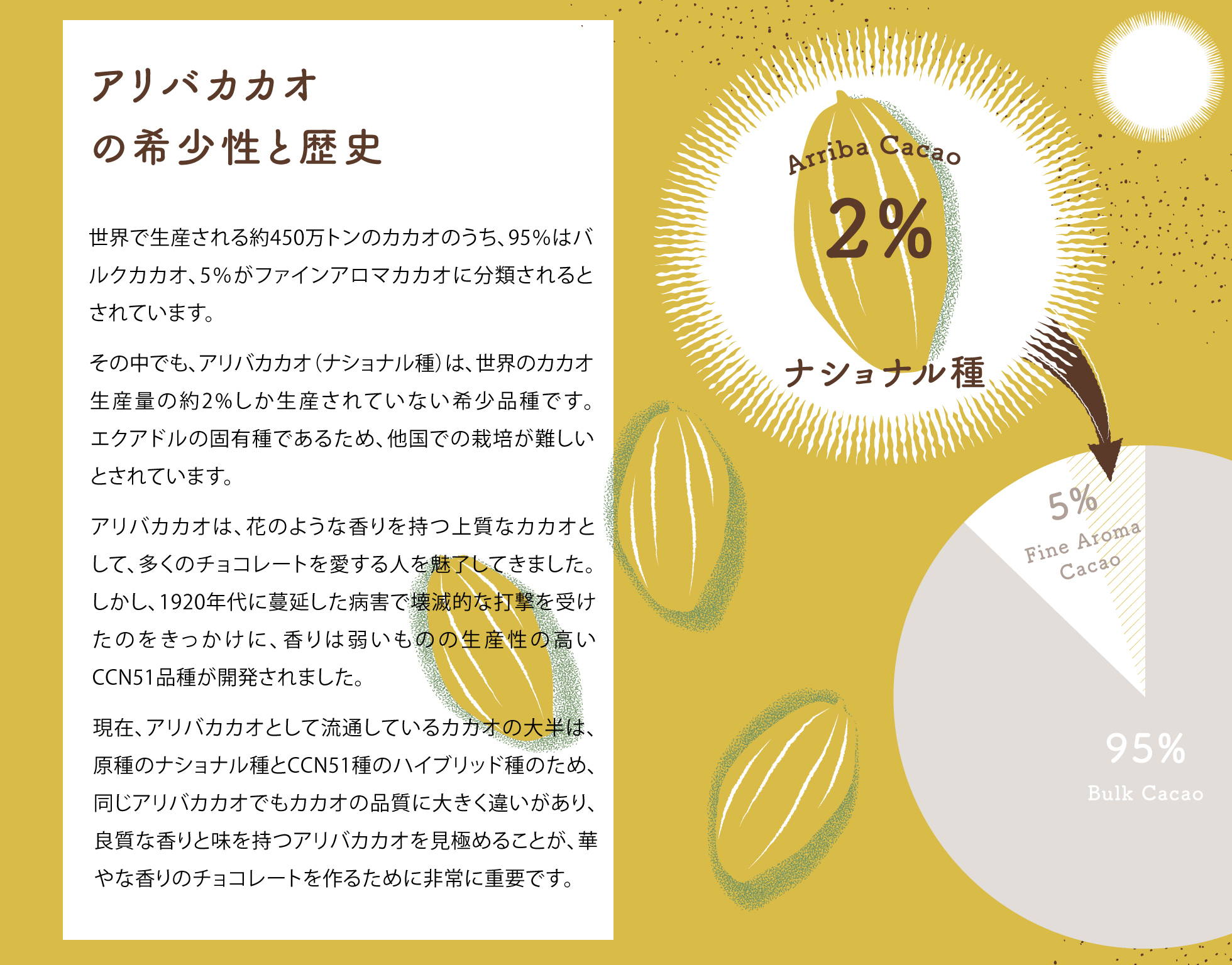 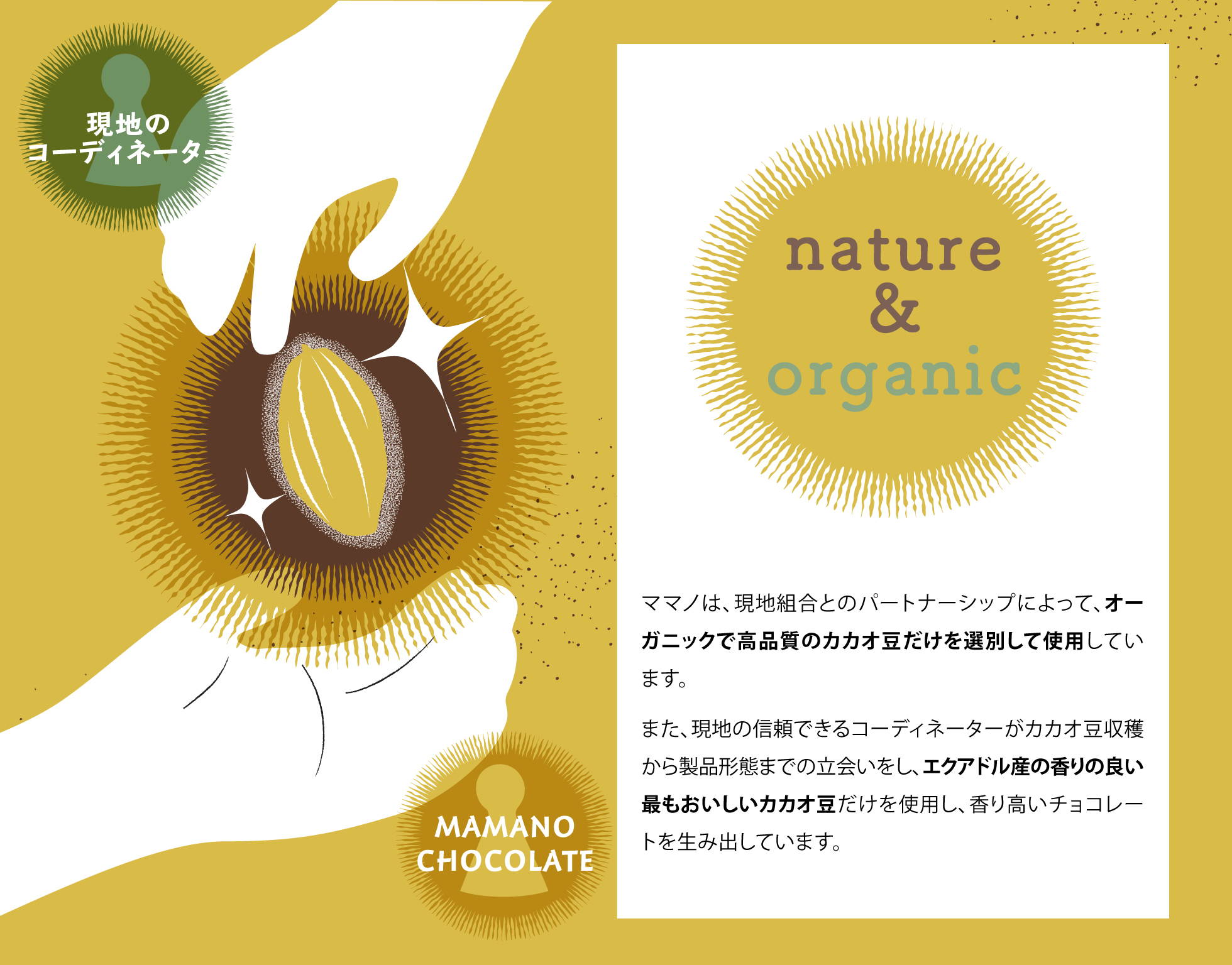 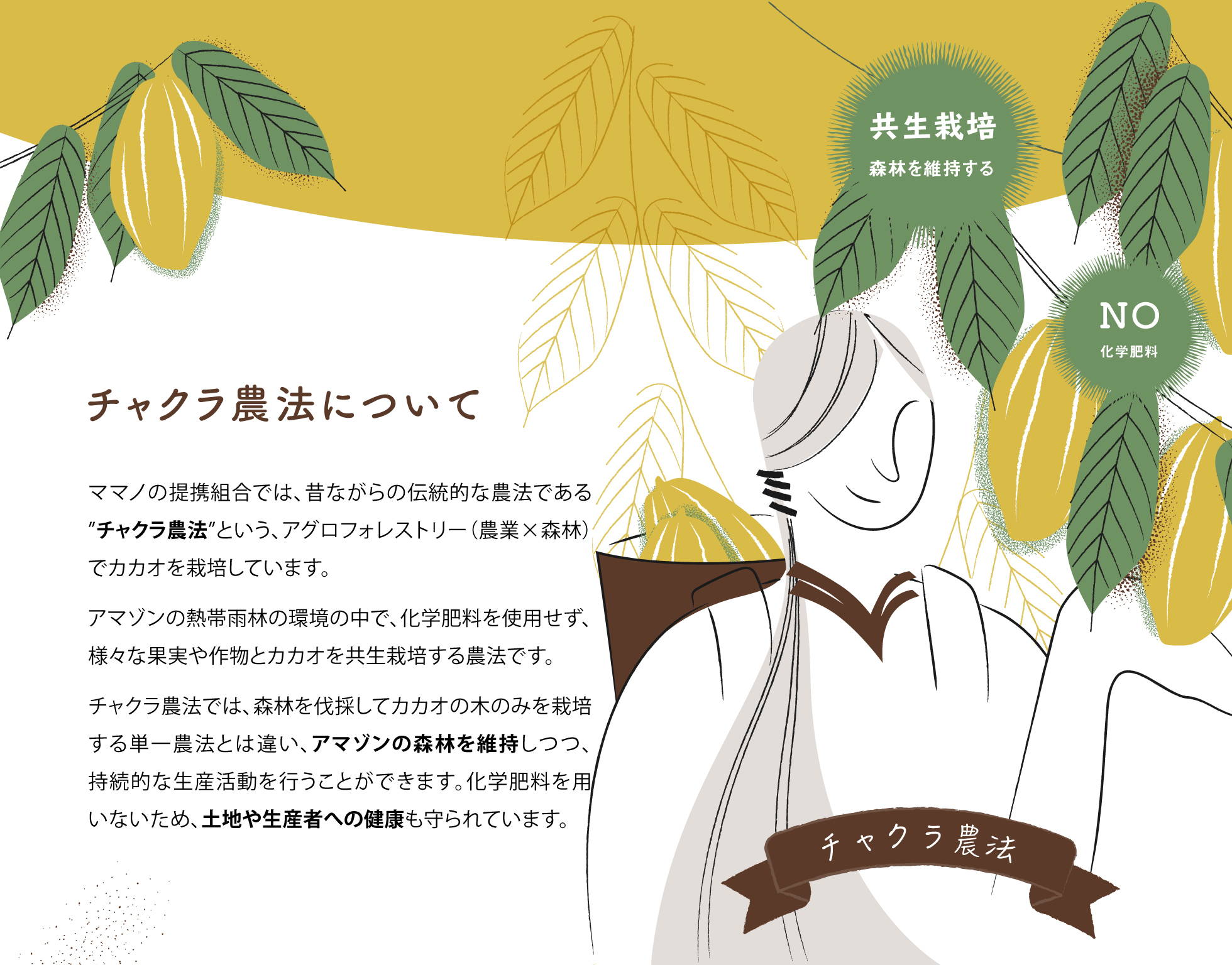 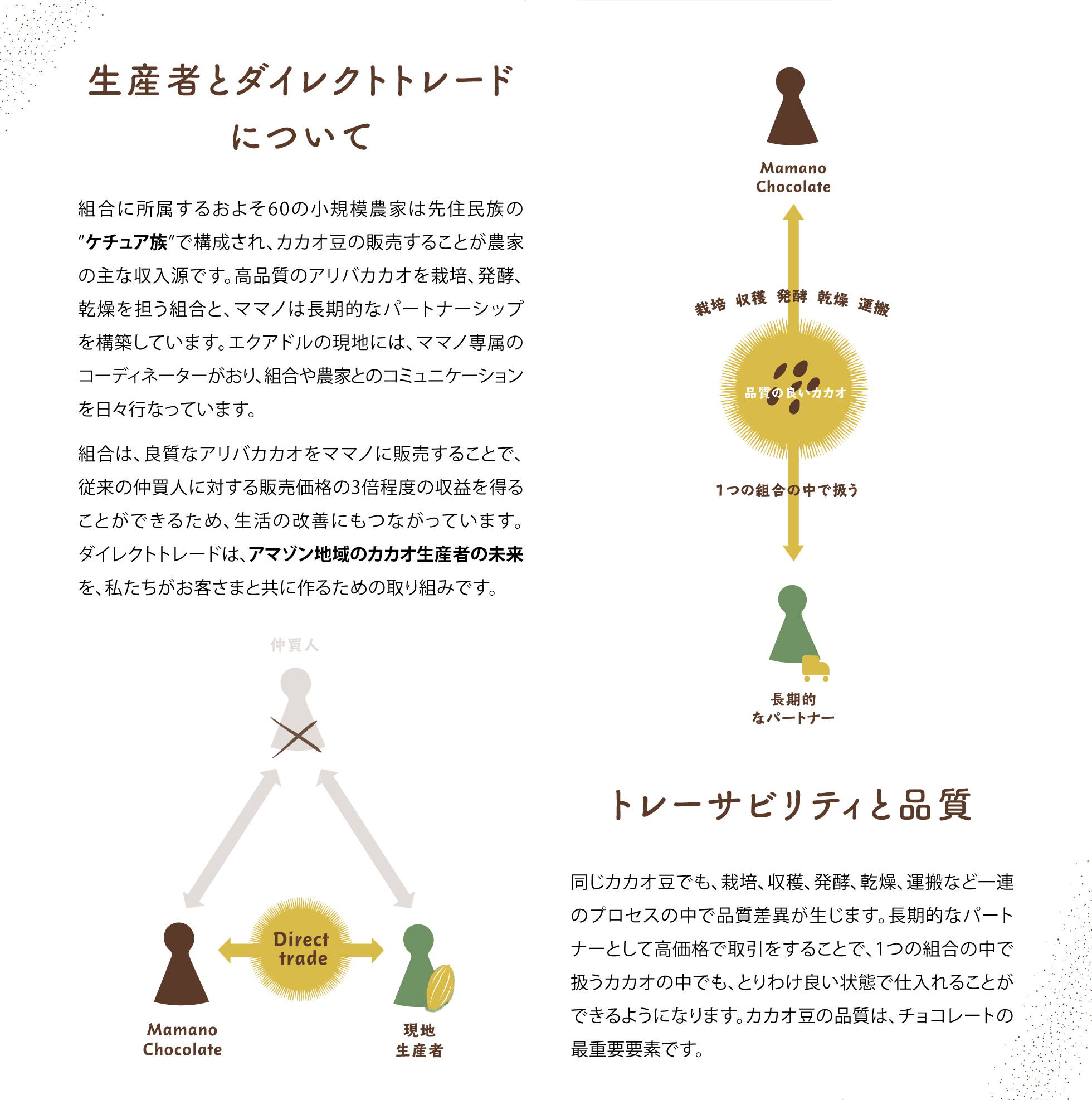 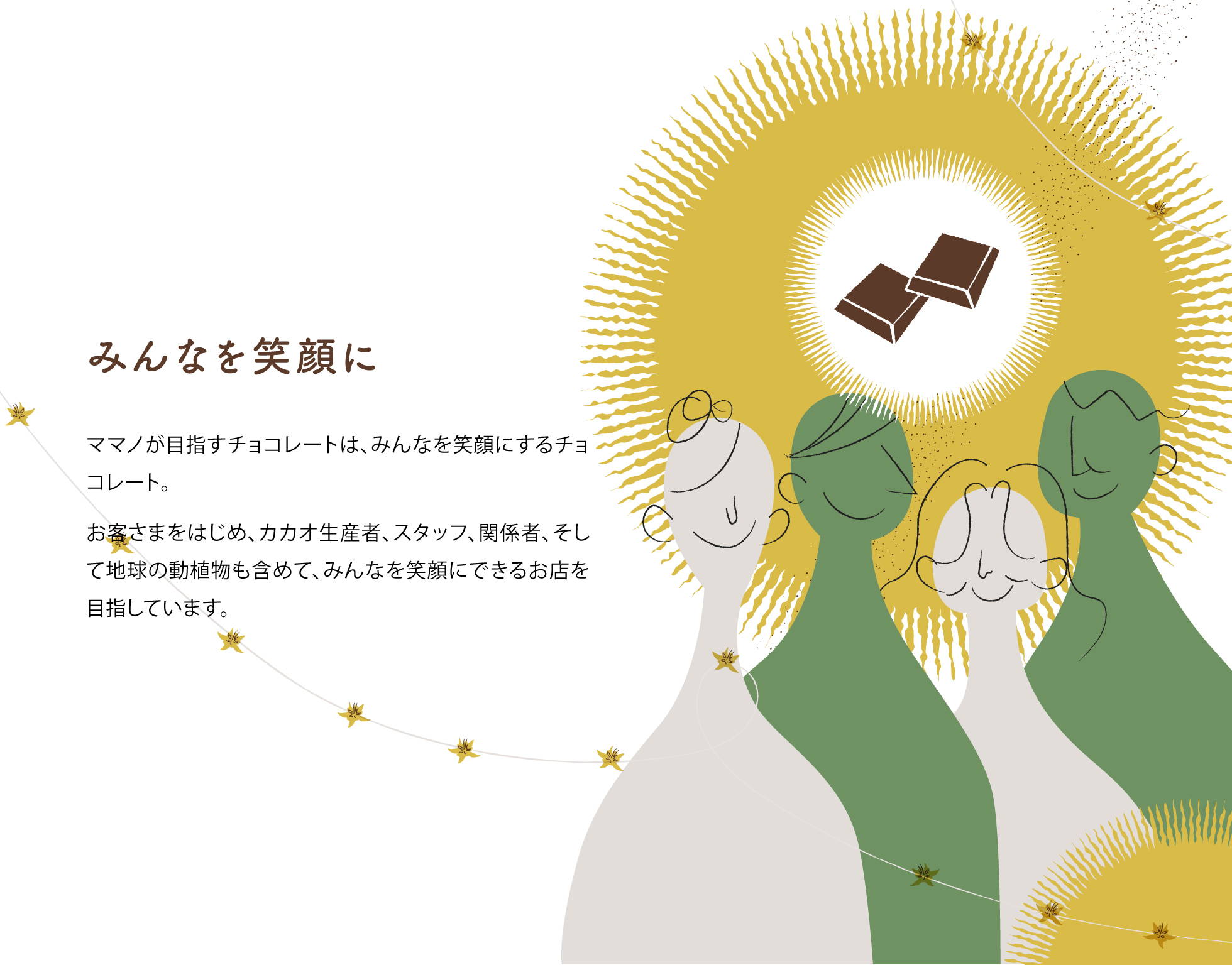 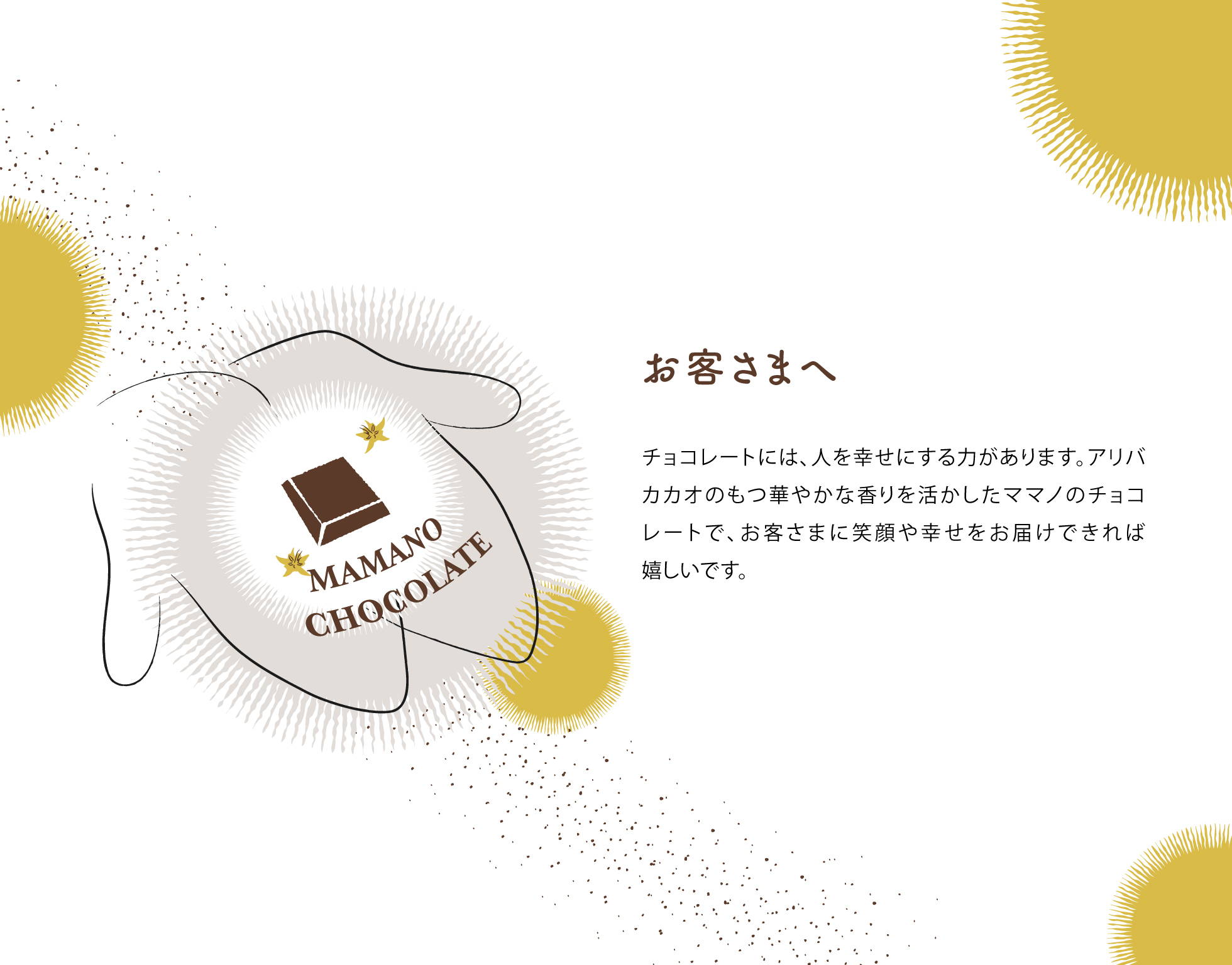 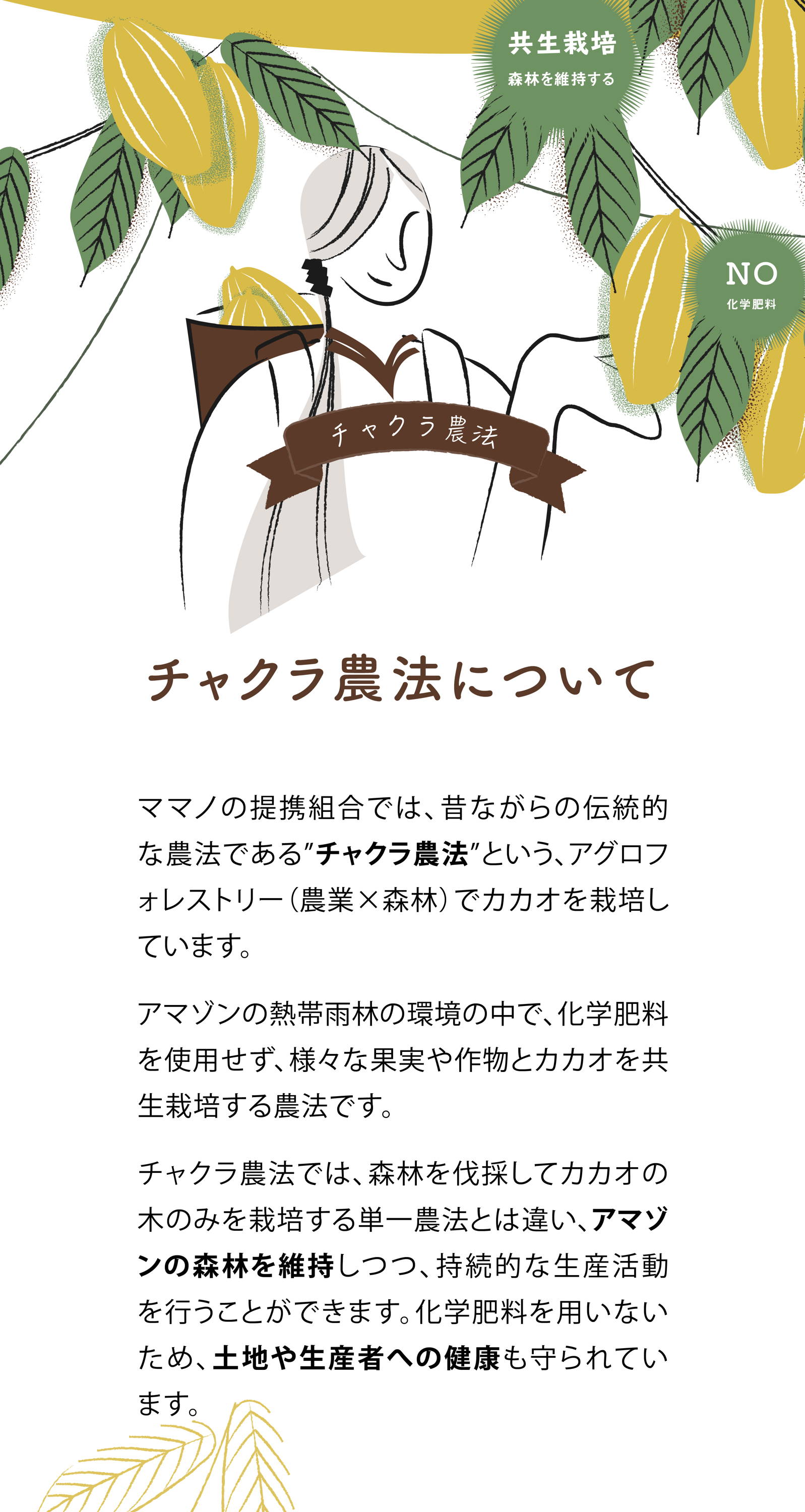 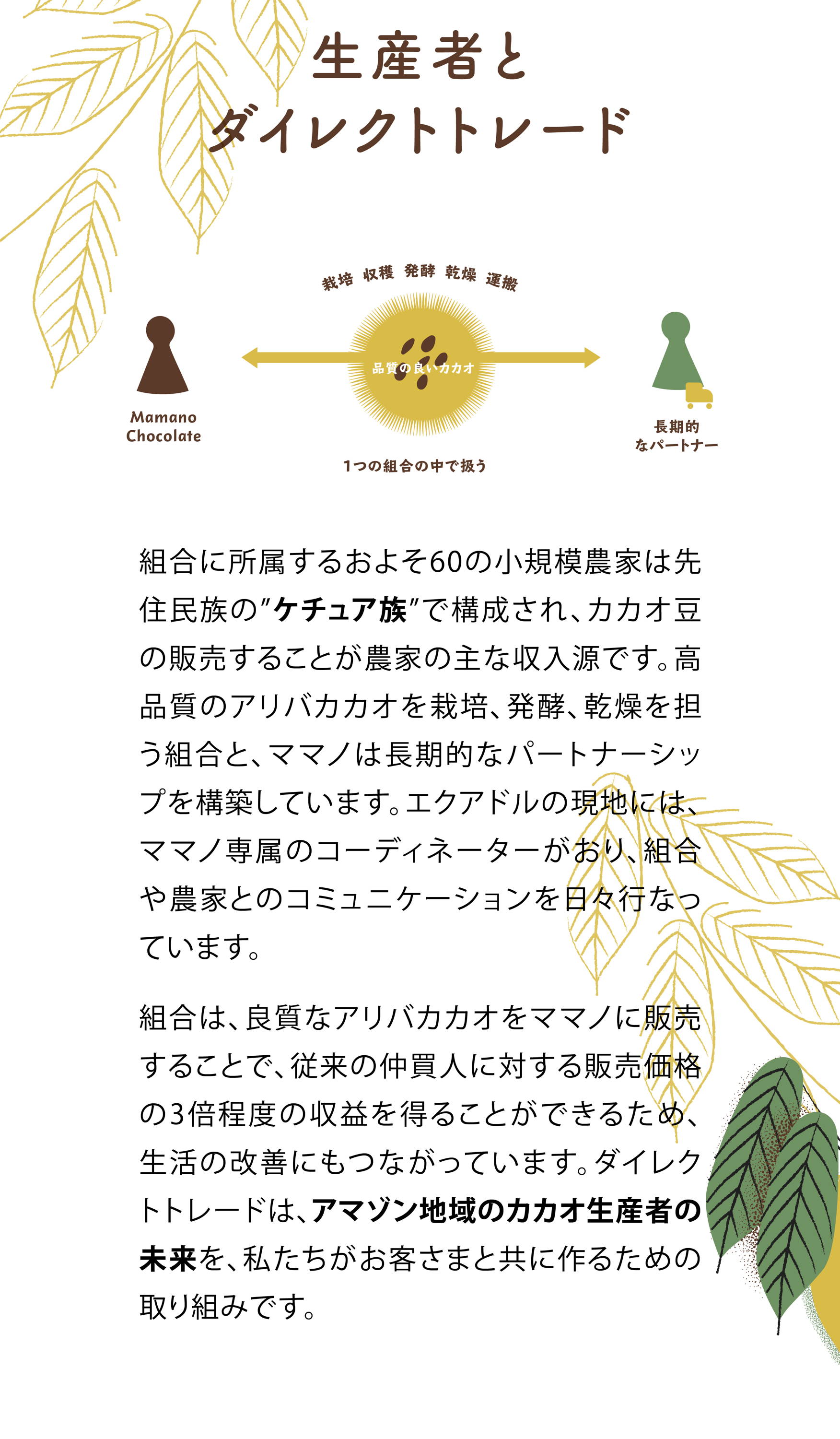 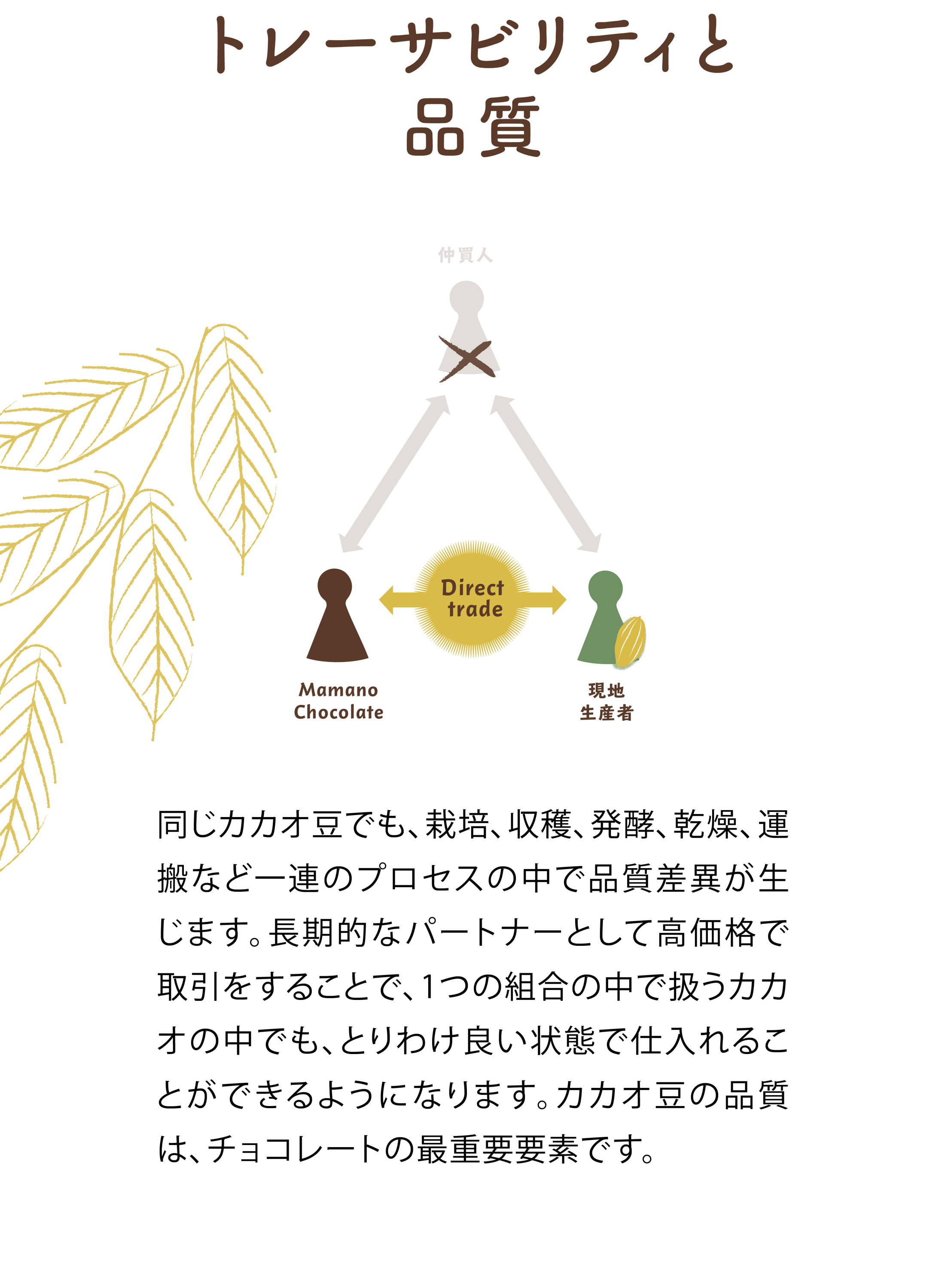 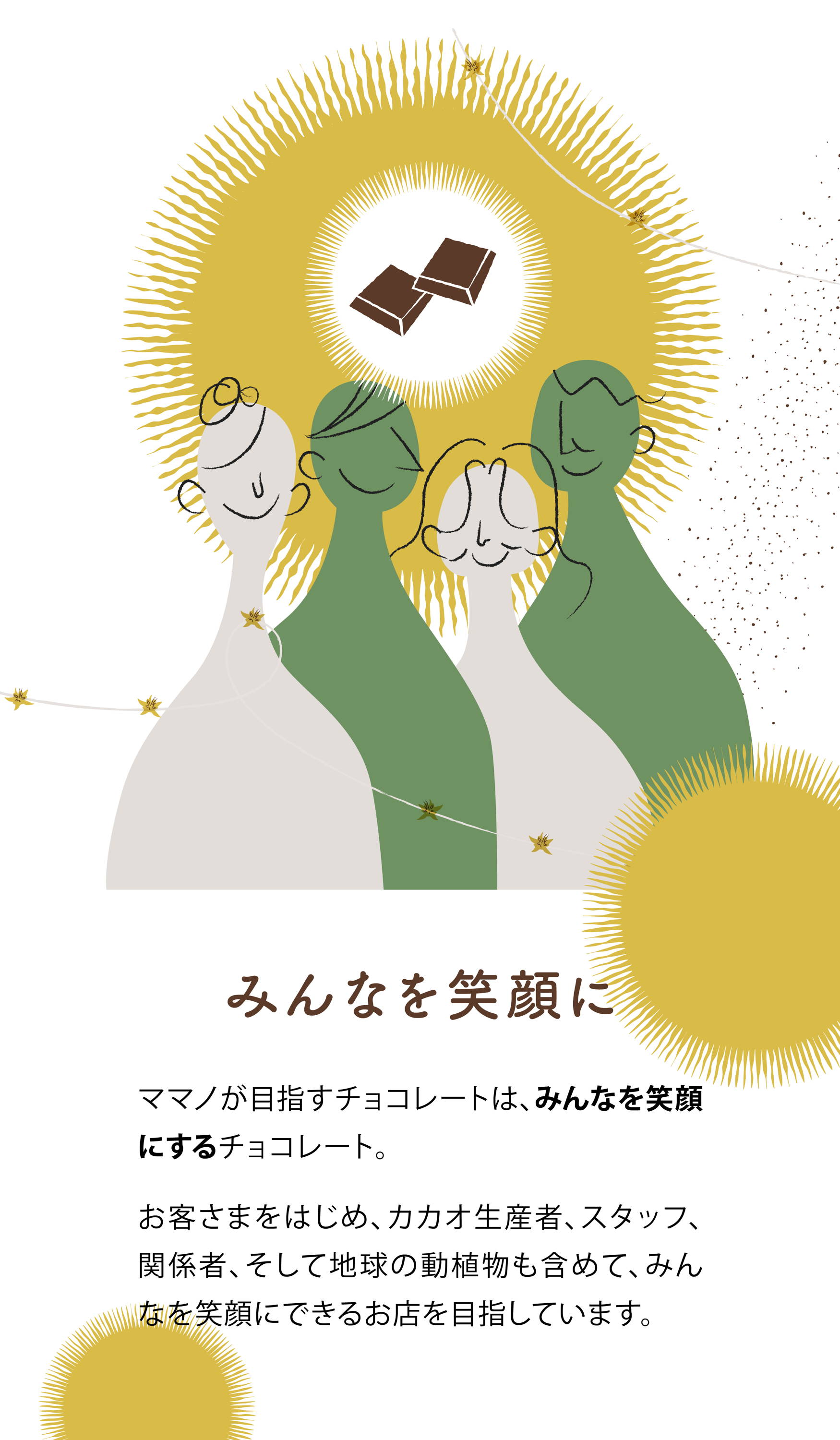 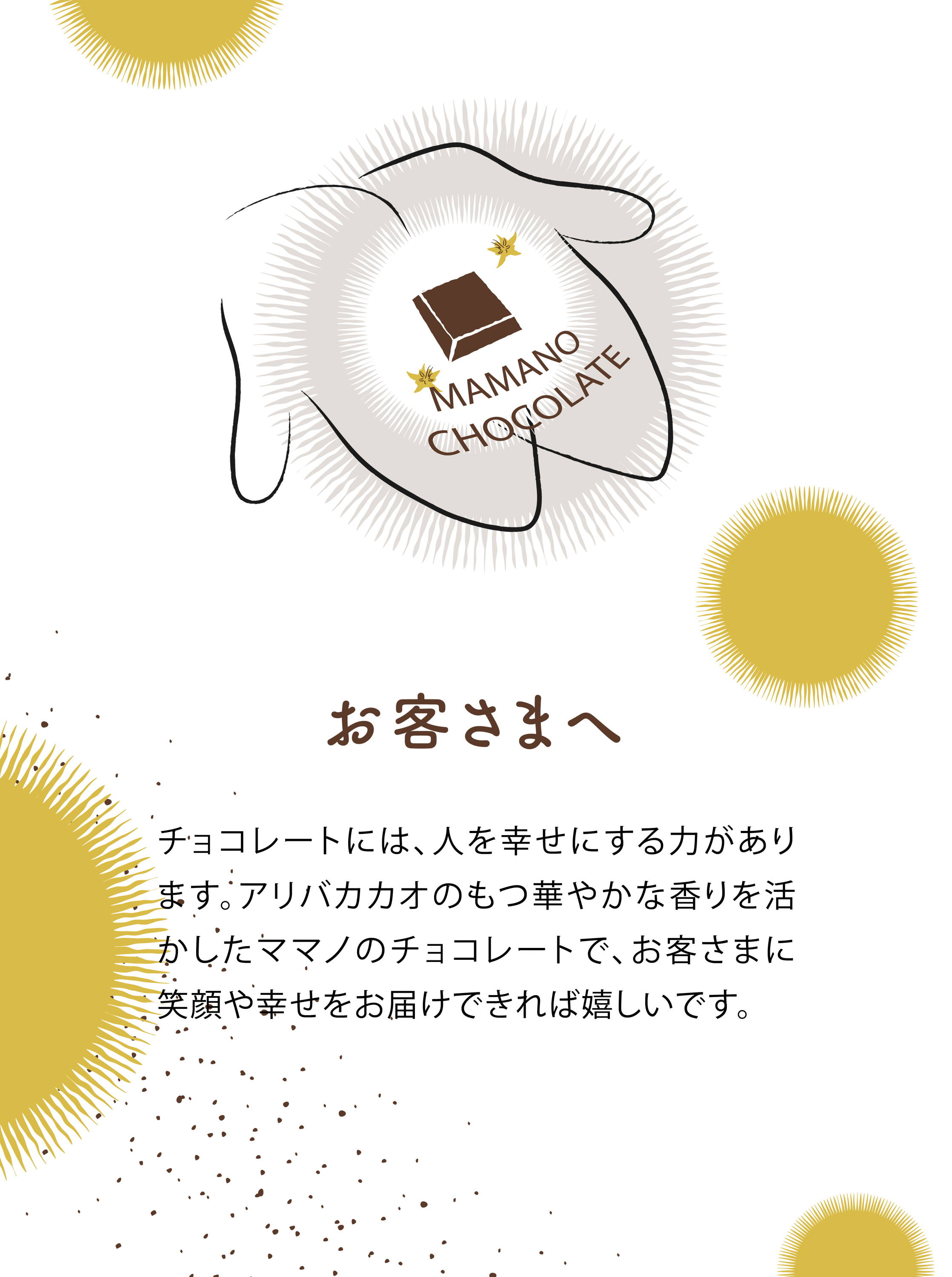 Chocolate was called to it a thousand years ago because it was valuable goods for the king and noble. Arriba Cacao we use it directly from the farmers has been grown by agroforestry in Ecuador, the birthplace of cacao culture for 5300 years is very rare cacao suitable for God’s food. MAMANO CHOCOLATE was born to make people happy of the utmost gorgeous moment by our chocolate made by the cacao.

There are 70% of our partners' cacao farmers are women and most of them are a mother. So I chose the word of “MAMA”. “MANO” is the image of the hand to lift up the cacao pods grown with the big love by them.Our logo is made by this image.

The secret of Arriba cacao

Arriba cacao is a very rare species harvested by 2% in the world. The official name is NACIONAL that is able to grow only in around Ecuador. About 90% of cocoa beans currently produced in the world are Forrastero species.(The breed classification is more subdivided now)

It is mainly grown in a large-scale production method called plantation in the former coloniality of Western Europe such as Cote d'Ivoire, Ghana, and Nigeria in West Africa.

Arribacacao species have attracted the people by their floral aroma flavor, on the other hand it is weak to the disease and suffered from the devastating disease that spread in 1920. Subsequently, many producers increased the cultivation of CCN 51 varieties with high productivity but low aroma, which led to the poor quality of Ariba cacao being marketed and lowering the evaluation of Ariba cacao itself.

At present (almost) Ariba cacao is being reviewed. However, most of the cacao distributed in Ariba cacao labeling is actually a mixture of hybrid species that can be mass-produced at low cost.

MAMANO produces fragrant chocolate using only reliable cacao from the farmers(currently a partnership with WINAK Association) with established traceability system.
In the conventional distribution system of cocoa beans through brokers, it was difficult to select and import only high quality cacao beans from specific farms, but Ariba cacao used at MAMANO have a strong partnership with the local association. that’s because only organic and high quality cacao beans can be selected and used.

Save the environment in Amazon

Mamano's partnership is cultivating cacao using natural farming methods that do not use pesticides and fertilizers in the Amazon rain forest environment.

They are engaged in sustainable production activities while maintaining the Amazon's ecosystem by means of agroforestry, which is cultivated with various fruits and crops.

Sustainable development for the farmers

The characteristic features of the assoiation are that a check system has been established to deliver high quality cacao beans, and that cacao beans quality improvement activities are actively organized as an organization.

While preserving the environment with traditional farming methods, we are incorporating new wisdom and technology into it, aiming for sustainable development into the future.

Aim for sustainable development of local communities while preserving the biodiversity of the Amazon. The revenue obtained is reduced to cocoa producers. Union members protect the Amazon forest and aim for independence of the community. We practice direct trade that leads from the past to the future.